We’ve put together a little resource for RSEs (or anyone else!) who are writing browser based apps and want to be using the latest Javascript web technologies, but aren’t sure where to start.

The full poster was presented at RSLondonSouthEast on 6th February.

Why use a framework?

This StackOverflow blog is an excellent overview of the advantages and disadvantages of using a framework: Is it time for a front end framework?

Front-end apps of a certain size and complexity have to handle:

A Javascript framework provides some ready-made structure you can use to organise your application, including:

If you’ve just gotten started with the world of front-end frameworks, you’ve probably heard of components and directives. These are the key building blocks for modern JS frameworks.

A component in usage looks like a custom HTML element:

while a directive looks like a custom data attribute on a regular HTML element:

A component is a combination of a template that defines the presentation, and a script that defines behaviour.

Here’s an example of an HTML template in Vue.js. It uses the v-for directive to loop over an array:

And here’s how you’d achieve the same thing in React. React doesn’t support HTML templates but instead uses JSX, a syntax extension to Javascript that resembles HTML:

You might have heard of Flux - it’s a code architecture pattern pioneered by Facebook, the creators of React, and now widely adopted for organising complex front-end applications. React by itself is just a lightweight library for writing components, but it is commonly used in conjunction with Redux which is a Flux implementation. And Flux is simply a pattern, so it can be used in conjunction with any library at all, not just React.

The best way to understand Flux is probably to read the docs over at Facebook. But in a nutshell, it’s a uni-directional data flow pattern inspired by functional programming: 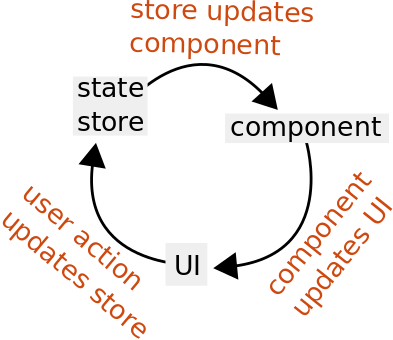 It can add a lot of boilerplate code to your app, so it’s not always the right solution. If you’re just writing a handful of mostly independent components, you almost certainly don’t need it. If you have a complex, dynamic app with many components that need to share state, then it can be really useful.

In general, use Redux when you have reasonable amounts of data changing over time, you need a single source of truth, and you find that approaches like keeping everything in a top-level React component’s state are no longer sufficient.

Vue, like React, is a lightweight library with no strong opinions about application architecture. But it too has a complementary Flux library, called Vuex.

Angular, by contrast, is quite opinionated about application architecture - the pattern it uses is reminiscent of the Model View Controller pattern. If you’re more familiar with Object Oriented patterns like dependency injection than you are with Functional programming styles, Angular may seem more intuitive. Having said that, you absolutely can use Flux with Angular as well.

Here’s how the “Big 3” frameworks of Vue.js, React and Angular (aka Angular 2) compare in terms of their features:

Picking a framework partly comes down to personal preferences - for example, most people find Vue’s syntax a little easier to pick up, and I personally prefer writing HTML to JSX. But then I find React’s “Redux” package more elegant and slightly less boilerplate-y than Vue’s equivalent “Vuex” package. For this reason, if I were writing a complex single page app, I would prefer React + Redux, but if I just wanted to add a small amount of front-end code to a full-stack monolithic app, I’d pick Vue.

One important consideration is just how popular the different frameworks are. The Javascript ecosystem moves pretty fast, and you don’t want to back the wrong horse and end up using a framework that gets discontinued or just falls behind. At the moment React seems like a solid bet in that it has a large, enthusiastic user base. Angular is still very widely used but it seems like it’s less popular with developers than the other two. Vue has fewer downloads than React, but developers are very enthusiastic about it. 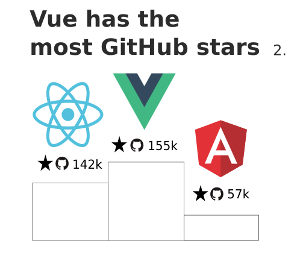 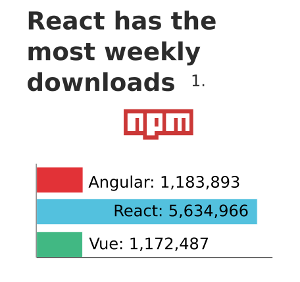 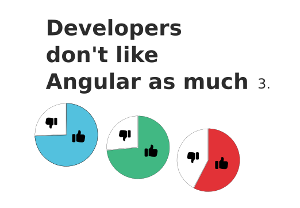 If you’re already using a front-end framework, let us know how you made your choice!